The Long Home series continues with book two, Consuming Fire, now available in paperback and ebook. In this installment of the series, Adam, Nim, and Pete (aka Rocky) have been reunited in a new world and their past grievances have been resolved. Adam has embraced his new role as teacher and innovator, and soon he and Nim become fascinated with science research and rediscovering technology. There’s much to uncover about the new earth they inhabit, which has different universal laws they must face and decipher. Prince Kristos has established his realm but hints of insurrection trouble him. Can he preserve the peace?  With Teufel out of control it will take all Kristos’ strength and wiles. What will happen next? Available in paperback and Kindle format on Amazon.com, in paperback and NOOK book from Barnes & Noble, and look for it at other online booksellers. And while you’re there, pick up book one, The Long Home: Now & Then.

Indie authors can find the best pre-made book covers, ready for customization, at SelfPubBookCovers.com. We’re thrilled to say another wise author choose one of our covers for his latest book. There are more WE designs awaiting customization on our Ready-Set-Go Covers page in our Book Covers catalog. Don’t see what you want or need? Drop us an email and we can talk about a custom design that will make your book shine. Need a back cover and spine? We can do that too! To see additional choices visit our page (under artist name SironaDanu) at SelfPubBookCovers.com.

Ebook and paperback avail. at Amazon and other outlets.

WE was honored to again work with John to prepare his latest Willow Brown book for publication. Willow and Noah are back for more intrigue and romance, plus a few revelations and general fairy craziness. From the description: Noah Phelps has grown used to disrupted life since meeting his fairy friend and soon-to-be wife, Willow Brown. After all, when you live in a houseful of fairies, you expect commotion. Secrets are routine as Noah becomes enmeshed in Willow’s guarded lifestyle. She’s pregnant but tells no one. They’re to be wed but only a few people can know. And what is the secret object that she’s hidden, the Thing that calls to him in the night? All will be revealed, she promises, ‘Someday.’ One mishap leads to another and soon all the Big House fairies are catapulted into a race to protect Willow, her unborn child, and the peace of the fairy people in a contest that reveals more secrets than Noah ever wanted to know.” Available on Amazon.

Another smart indie author chose a stunning book cover by Word Edge. Thanks, author! There are more WE designs awaiting customization on our Ready-Set-Go Covers page in our Book Covers catalog. Don’t see what you want or need? Drop us an email and we can talk about a custom design that will make your book shine. Need a back cover and spine? We can do that too! To see additional choices visit our page (under artist name SironaDanu) at SelfPubBookCovers.com.

A lucky indie author snapped up one of our gorgeous book covers. Yay! We have many more Ready-Set-Go Covers awaiting customization in our Book Covers catalog. Don’t see what you want or need? Drop us an email and we can talk about a custom design that will make your book shine. Need a back cover and spine? We can do that too! And don’t forget our Publishing services–always affordable and professional–we can produce your book, inside and out, and get it into the sales chain all at a reasonable cost. Get the details by emailing us at contact@word-edge.com to discuss your book project or cover.

Ebook and paperback avail. at Amazon.com and other outlets.

John Osborne has always liked a good story and a good challenge, and so decided to attempt writing a novel with one goal in mind: to entertain. That was several years ago. He now has three urban fantasy books in the Willow Brown series to his credit. The latest, Willow Brown: Plain Fairy, is as fun a romp with romance, intrigue, mystery, and modern fairy lore. Willow and her human friend Noah have developed quite a following and John’s regular readers are excited for this new release. As with his previous two novels, John contacted Dawn Johnson of Word Edge to critique and edit his working draft. In Plain Fairy‘s acknowledgements, John notes:

Years ago, I posted some of the first chapters of An Ordinary Fairy on a writer’s critiquing website …. A few of the other authors liked my concept, though, and made some good suggestions to improve my writing. One in particular … took close interest and as time went by and I moved on from the website, we struck up a friendship. [She] turned out to be Dawn Johnson, who has edited all three of my novels … she brings sanity to my writing. An old friend of Willow and Noah, Dawn sometimes knows how they should react to a situation better than I do. My stories are enhanced because of her. 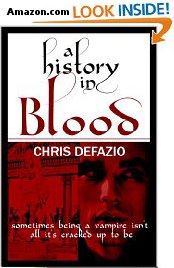 When fledgling author Chris DeFazio came to Word Edge in 2012 he had one hell of a vampire novel on his hands. It had lots of good aspects and lots to adjust during editing. Chris needed guidance to learn what to save, what to cut, and what to improve or change. Dawn Johnson rolled up her sleeves and dug into the novel, rooting out the gems and gold and infusing Chris with the advice needed to move the novel into the next draft and beyond. Now, more than a year later, Chris DeFazio is delighted to announce that his novel A History in Blood was published by TouchPoint Press this month. It is currently available for Kindle on Amazon.com with the paperback release scheduled for February 2014. Join Word Edge in celebrating Chris’s talent and his first novel being accepted by a publisher.

Dawn’s critique was honest, insightful, and refocused me to move in the right direction. She analyzed both structure and content perceptively, and has improved my writing immeasurably. Chris DeFazio (2012)

Chris DeFazio is a vampire-loving ER physician and author who lives in the United States.

We’re proud to announce that Dawn Johnson’s editing of Poul Bregninge’s self-translated book, Judgment Day Must Wait, secured him a contract with YBK—a publisher who had previously rejected it. Dawn partnered with the author to rework the manuscript, performing a comprehensive developmental edit  to improve language and clarity for an American audience while retaining the author’s voice and purpose. Bregninge is thrilled with the result and that it led to a publishing contract. The manuscript’s stunning transformation has earned enthusiastic praise from the publisher:

The contribution that Dawn Johnson has made to your work is amazing and most commendable. (Nov. 2012)

In recent weeks the nearly 600-page book has gone through two galley proofs and the index materials have been edited and refined (also by Word Edge). 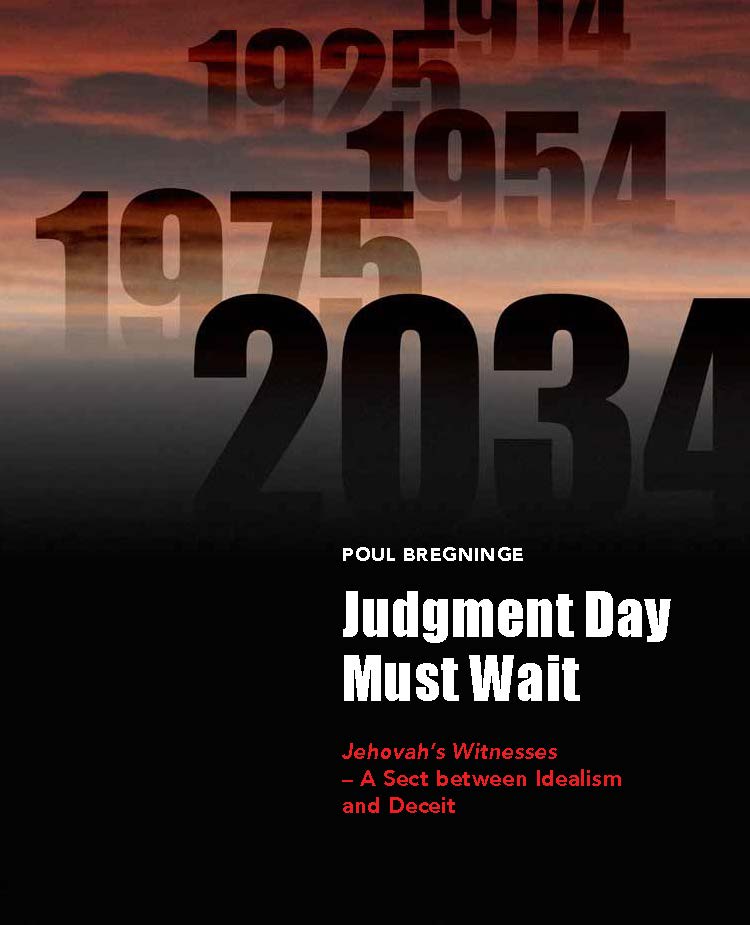 The author of Judgment Day Must Wait was born in Copenhagen in 1936. He was raised a Jehovah’s Witness. In 1959, Poul Bregninge severed ties with the Witnesses, and by 1964, after Bregninge had written several controversial letters and articles about the Witnesses, a three-man committee expelled him.

The Witnesses’ main organization, the Watch Tower Society,  maintains a strong, efficient structure to focus their members on the Day of Judgment. It is the fear of that moment of accounting that keeps their followers firmly in the fold and working for the good of the organization. Critical thinking and questions are not allowed. If one decides to leave the movement, the consequences are often deliberately destructive to both the individual’s well-being and his or her family.

Bregninge presents the reader with a critical, but fair, distillation of the movement’s historical and ideological background. Distorted and suppressed by Watchtower leaders, Bregninge clarifies the drama of Mr. and Mrs. Russell’s strife and separation. It is a treasure trove of historical and often revealing details not widely known. Weaving into it his own experiences and interviews with present and former Witnesses who relate the difficulties and the consequences of living under the iron heel of a fundamentalist, doomsday religion, Bregninge tells his story. 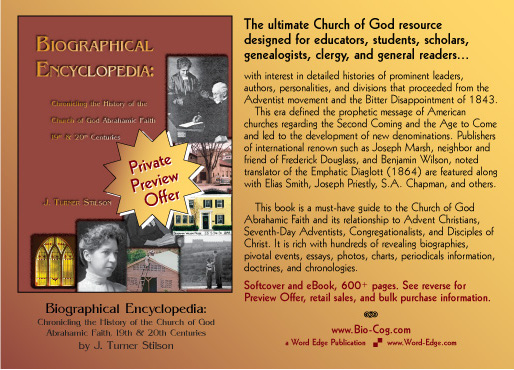 In mailboxes now, a Private Preview promotional offer for J. Turner Stilson’s Biographical Encyclopedia of the Church of God Abrahamic Faith reaches out to religious scholars and educators. The preview offer provides invitees with biography samples of pivotal historic figures in the Church of God. Included in the offer is special wholesale pricing for schools wishing to carry the book in campus stores and/or develop curricula around the history of this American denomination and others related to it such as the Seventh-Day Adventists. Contact Word Edge if you have not received a card but would like to learn more about this offer. Offer expires April 30, 2013. 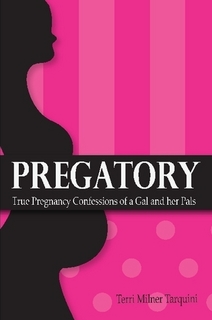 Terri Milner Tarquini’s second book, Pregatory: True Pregnancy Confessions of a Gal and Her Pals, is now available. Congratulations, Terri, and many thanks for choosing Word Edge to help prepare your manuscript for publication.

“Nobody ever told me that!” Ahh, the wail of the pregnant woman as another truth is revealed. No, they didn’t. But the outspoken gal and her confidantes do in this book. “Pregatory” irreverently breaks it down best-girlfriend-style, shooting straight on everything from pregnesia to pelvic rest to pooping while in labor (yep, it happens!). This is gal pals doing what they do best: being bold and bawdy, honest and hilarious, outspoken and outrageous, sharing like sisters in spirit, and owning their personal pregnancy confessions … no matter how embarrassing they just might be.

Pregatory is available at Lulu.com, and coming soon to other online retailers including Amazon.

Biographical Encyclopedia: Chronicling the History of the Church of God Abrahamic Faith

Available for purchase/download from www.bio-cog.com and other online sources, this quality digital edition is easy to read, searchable, and includes every remarkable photo, chart, and illustration found in the original soft-cover.

Biographical Encyclopedia: Chronicling the History of the Church of God Abrahamic Faith, a 620-page, soft-cover volume with hundreds of biographies, photos, charts, and illustrations.

This comprehensive book presents the personalities and events that shaped a denomination, honoring and recording the faithfuls’ commitment to God through dedication and sacrifice, while revealing, with forthright honesty, the controversies and disagreements. This reference book serves as an ultimate resource for students, scholars, genealogists, clergy and believers  of all ages.

Jan Turner Stilson, in conjunction with the Church of God History Committee, spent many years compiling and researching material for this project. The entries span the breadth of the Church of God’s development from its earliest tender steps, through turmoil and dissent, and on to stability and unity.

Word Edge understood what this book represented for the author: chronicling two centuries of a denomination’s growth and development through the lives of those who shaped it. Jan Stilson entrusted Word Edge with multiple levels of her project, including editing, book design and layout, pre-press details, pdf generation, and printing through our digital source.